The Great Recession of the last decade took a severe toll on the construction industry in Florida. It forced many construction companies and those that supplied them out of business. It took courage and foresight, and a certain white-knuckle fearlessness, to weather the storm and come out whole on the other side. But for those that did survive, and were able to keep their core intact and maintain their reputation, there has been significant opportunity in recent years.

Architectural Aluminum Techniques (AAT) and its CEO and owner Sunil Tarneja weathered just such a storm and, with the help of his wife and CFO Sujata, key members of his management team and a group of CEOs brought together by the Florida SBDC at UCF in its CEO XChange program, he navigated the company through the Great Recession and on to a record year in 2013 when it recorded a 200% increase in revenues. 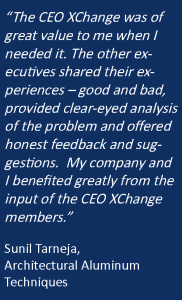 AAT is a sub-contractor to construction companies. It supplies architectural aluminum and steel engineered glazing systems that are often integral to the architectural style of an office building. They also often produce the materials that make up the unique architectural elements that make a building distinctive and memorable, such as the a 10,000 square foot outdoor balcony structure that juts from the Amway Center toward I-4 in Orlando, Florida, the Center’s 20,000 square foot glass entrance atrium facing Church Street or the modern glass and aluminum of the iconic UCF College of Medicine building. Architectural Aluminum Techniques had a hand in the construction of each of those remarkable buildings.

Founded in 1992 when Sunil and Sujata moved to Orlando from Toronto, Canada, AAT was built from a standing start, competitive bid by competitive bid. The company achieved break even in 1996 and enjoyed positive growth and profitability in the following years. They grew to be a multi-million dollar business with upward to 90 employees by 2009.

AAT was a success story indeed. Until the Great Recession hit, that is. Commercial construction tends to lag residential construction and when Sunil saw the dramatic decline in residential building activity in 2009, he knew there was trouble around the corner. Having felt the pain of the 1990 recession in Canada, he was prepared to do what was needed to save his company. In 2010 he slowly began downsizing the company, releasing good people because there was no work. 2011 was no better for AAT and the downsizing continued.

By 2012, Architectural Aluminum Techniques was down to its core team of 20 employees. For many of them, there was no work. Revenues had fallen precipitously to the point where they did not cover payroll. The times were dark and the future looked bleak. Fortunately, Sunil had learned from his experience during the Canadian recession, and had always run AAT very conservatively, making sure that it was financially strong with adequate cash on hand at all times. During 2012 he had to use some of those cash resources to make payroll. And he led an “all hands on deck” sales effort during the down times, having all of his employees calling clients and bidding on almost any deal they found.

It was during these difficult times in mid-2012 that Sunil brought his challenges to the Florida SBDC at UCF’s CEO XChange program. An executive roundtable program serving progressive chief executives and business owners, CEO XChange offers a confidential setting to discuss vital business issues, opportunities and trends with a group of peers and benefit from their experience and counsel. At the CEO XChange meeting, Sunil laid out his issues; he had battened down the hatches, cut overhead, downsized to his core employees but was still bleeding money. His inclination was to hold on for as long as was necessary, but he wanted to hear from his peers about what they thought. An intense discussion ensued. Hard questions were asked. Painful experiences were shared. In the end, the group’s consensus was that Sunil should follow his instincts and experience, hold onto his core people and ride out the storm.

Buoyed by this vote of confidence, Sunil determined to stay the course. He retained his core team and continued to have everyone in the company pursue sales opportunities. Several months later, the construction market turned the corner. The Presidential elections seemed to be a turning point, as suddenly money for construction projects began to pour into the market. Architectural Aluminum Techniques began to win bids. They found that their strong reputation for quality products, the industry’s familiarity with AAT and its people and its financial staying power combined to help the company win business, even though theirs was not always the low bid. As a result, while the company endured a loss for 2012, it experienced a dramatic increase in revenues for 2013 which has turned into one of the company’s best years yet.

While Sunil recognizes that there were many factors that got him and Architectural Aluminum Techniques through the Great Recession, he acknowledges his CEO XChange experience as having made an important contribution. “The CEO XChange was of great value to me when I needed it. The other executives shared their experiences – good and bad, provided clear-eyed analysis of the problem and offered honest feedback and suggestions. They didn’t tell me what I wanted to hear the way an employee might and didn’t bring their self-interest to the problem. My company and I benefited greatly from the input of the CEO XChange members,” Sunil said.