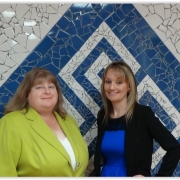 In the beginning of 2009, with the economy in a severe downturn and many businesses failing, Sarah Blake took a risk and opened Elipsis Engineering & Consulting, LLC with no capital, two employees and $200,000 in revenue.

This risk has reaped many rewards as the firm recently celebrated its fifth year in operation and was named one of the 2014 fastest growing private companies in Central Florida by the Orlando Business Journal (OBJ).

A second significant milestone for the firm occurred in 2012 when Elipsis applied to participate in the FSBDC at UCF’s Advisory Board Council program. “We joined the Advisory Board Council because we were such a young company and didn’t have all the expertise we needed,” remarked Blake.  She worked with Advisory Board Council Program Manager Jill Kaufman, who hand-picked a team of board members to address the company’s needs and accelerate their growth.  Experts in marketing, human resources, business law, finance, accounting, strategic planning and government contracting comprised Elipsis’ board of advisors.  According to Blake, “It’s an opportunity that you don’t typically have as a small business.  It’s hard to get the professional advice that you need and that’s affordable.  I would recommend the Advisory Board Council program because it is a great resource at no cost.” 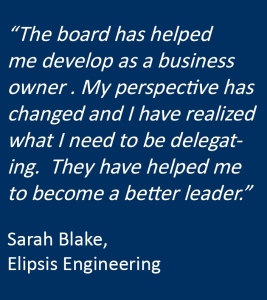 The board acted as a catalyst that helped drive the firm’s rapid development and expansion. “My board always made themselves available to me,” explained Blake.  “They have helped develop our business strategy and improve our hiring process, especially in a tighter labor market.  With the financials they have helped me understand our profit margin and develop goals and metrics for strong financial growth.  They have helped us establish a plan for our growth and resources.”  In addition to the board’s input on the business, they also mentored Blake on her personal development.  “The board has helped me develop as a business owner,” commented Blake.  “My perspective has changed and I have realized what I need to be delegating.  They have helped me to become a better leader.”

Blake says the top accomplishments of her company since her advisory board began in 2012 include: purchase of an office building which expanded their facility from 3,000 sq. ft. to 7,000 sq. ft.; doubling the size of their fleet of vehicles from 10 to 20;   increased staff from 17 to 30 employees; and increased revenue by 82%. Moreover, the firm was awarded two 5 year $5 million continuing service contracts with the Florida Department of Transportation for materials testing and geotechnical services and construction engineering inspection support.  In addition, Elipsis has worked on some of the region’s largest projects including Sunrail, Wekiva Parkway and I-4 Ultimate.

As she leads Elipsis, Blake is guided by a set of deeply-held core values which include “Significance”.  “We strive to be Significant by giving back to our community and assisting organizations that are making a difference locally and internationally,” Blake explained.  Although Blake and Elipsis have won numerous accolades including 2014 OBJ Fast 50; 2013 OBJ 40 Under 40; Orlando’s 2014 OBJ Top Engineering Firms; Orlando’s 2013 Largest Women-Owned Businesses; 2013 OBJ Women Who Mean Business; and 2014 OBJ Best Places to Work, one of the awards she is most proud of was being named among the 2013 Central Florida Top Philanthropic Companies.  “Our focus hasn’t been on large profits,” explained Blake.  “Our focus has been on having a good, stable work environment.  What we have found is that we have been more blessed than we ever could have imagined.  We are a company that our employees are proud to work for.”

Presented by Google Partner & National Trainer, Matt Weber, President of ROAR! Internet Marketing Get Started with the Most Effective Advertising Tool for Local Businesses: Google Ads Learn how to use Google Ads to drive more revenue for your business. Whether you are considering Google Ads for your marketing or are currently managing an account, this is a can’t miss session. Google Ads is a powerful, measurable advertising tool that should be in nearly every local business’ marketing plan. See how to use it with less risk and more success. Learn how Google ranks ads Learn whether you are a… [...]

Presented by FSBDC at UCF Assistant Director & Consultant, Pauline Davis and Consultant, Jose Molfino Cash is King. Every business has a hidden store of cash and hidden cash leaks. Utilizing the cash flow management strategies of large corporations, learn how to find, preserve, and use cash to manage and grow your business and increase profits. By applying these tactics you can vastly reduce the need for outside financing. You may never need to borrow money again!! Learn More [...]

Finding International Customers in a Virtual World: Export Marketing in the New Normal
4 May 2021

Managing for Profitability and Success: Creating and Applying Key Performance Indicators (KPIs)
11 May 2021

The secret to growing your business profitably depends heavily on establishing a real-time dashboard of key indicators of your business’s business performance. They enable you to make operational adjustments and seize on growth opportunities. In this webinar, we explore how to both identify those key metrics and use them to manage your business toward maximum performance across multiple functions, including sales, marketing, operations and profitability.  Topics to be covered:• What are Key Performance Indicators (KPIs)?• Determining the most important metrics to measure• Establishing an effective performance dashboard• Connecting team members’ contributions to the business’s health [...]

Business Plan Writing Made Easier
13 May 2021

Presented by FSBDC at UCF - Lake County Area Manager & Consultant, Eddie Hill Your business needs a roadmap for every stage of its growth. We’ll remove the mystery of how to create a business plan, the information that should be included, and how to use it as a tool to keep your company on track for long term growth. Fee: No cost Register Now [...]

Presented by FSBDC at UCF Consultant, John Finnegan The need for business owners and executives to take a creative and innovative approach to protecting and growing their business was critical in the COVID environment. Frankly, it’s every bit as important as businesses enter the “New Normal”. We will introduce and discuss a number of “Outside the Mask” ideas designed to help broaden your approach to growing your business. Learn More [...]

Does Your Website Comply with The ADA? What Every Business MUST Know
25 May 2021

The Americans With Disabilities Act (“ADA”) has been around for more than 30 years.  However, in the last few years, increasing attention - and ensuing lawsuits - have focused on the accessibility of websites for the disabled.  Along with the tremendously increased use of the internet and ubiquitous websites for commerce, this trend is only increasing.  Indeed, Florida is one of the states that has seen the most lawsuits in this area.  What businesses do not know in this area can truly hurt them.  There is significant risk, and increased likelihood of being a defendant in a lawsuit, for businesses… [...]

Hiring the right employee is a challenging process.  The right employee can make all the difference in a company’s success and can often make up for the absence of other resources such as facilities, working capital, and limited products. The wrong employee can cost you valuable time and money. It adds up to making the hiring process crucial for small businesses.  In this webinar you will learn:• Best hiring practices and how to overcome challenges common to small businesses.• How to properly onboard a new employee. [...]

Presented by FSBDC at UCF - Osceola County Consultant, Rafael Pratts A webinar providing an overview of the marketing process for small business, as well as a close look at all elements of a marketing plan. Marketing is the driver of revenue growth and an imperative for small business success. Topics include the traditional four “P’s” of marketing – Product, Place, Promotion, and Price – as well as three new “P’s” with special application to small businesses – Positioning, People, and Planning. Fee: No cost Learn More [...]

all events
A Common Sense Approach to Business Success