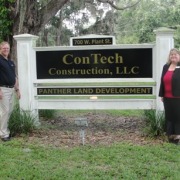 In classic entrepreneurial style, Alan Haughey and his wife Joan started ConTech Construction in 1993 in the living room of their Orlando home.  At its founding, the firm was a general contractor and concrete contractor that employed a staff of three.   Today, ConTech has offices in Winter Garden, employs a full time staff of 62, and Alan and Joan are joined in the business by their son Jeff.

ConTech’s success has come about in large part as a result of the solid reputation for integrity, collaboration and high performance that the Haugheys have built for the company.  In fact, ConTech’s name is so esteemed in the industry that 92% of the firm’s work comes from repeat business and direct referrals.  Alan Haughey’s more than 35 years in the concrete industry has enabled him to establish many long term relationships with clients and industry-leading firms.  That, combined with the firm’s strong financial standing and bonding capacity of over $10 million, has enabled them to take on larger jobs.

ConTech’s projects can be seen all over the region including Winter Garden City Hall, Uptown UCF, SunTrust Plaza and an eight-inch thick ice floor at Amway Arena.   The firm has poured over 160,000 cubic yards of concrete ranging from theme park rides at Disney World to a nuclear power plant and boasts a 99.998% rate of accuracy.

ConTech has won many accolades for their work.  Their $6.5 million restoration of the Royal Floridian Resort in Ormond Beach earned them 2011 Project of the Year by the International Concrete Repair Institute.   The firm has also received the Eagle Award from the Associated Builders and Contractors for excellence in construction of the Winter Garden City Hall.

Alan Haughey believes that “innovation and modifying your business to keep up with ever-changing realities” are keys to ConTech’s success.  Joan and Alan took action on this belief when they sought the assistance of the Small Business Development Center at UCF’s Advisory Board Council (ABC) in 2007.  “For me, joining the Advisory Board Council was our first major step in the process of working on the business rather than in it,” said Alan.  “We were so overwhelmed with the day-to-day operations that it was very difficult to focus on the strategic business changes that we needed to make to survive in a changing economy.  That’s why we sought out help from an advisory board at the SBDC.”

Jill Kaufman, the ABC program manager, worked with ConTech and hand-picked a board of volunteer advisors for the firm comprised of professionals in the fields of finance, business development, human resources, succession planning and law who were willing to donate their time and energy to working on the board.  According to Haughey, “The people who were on the advisory board were absolutely expert in their fields and they encouraged us to look at everything we do rather than just operations.”

The business graduated from the ABC program at the end of 2008, and Haughey points to three topics that were focused on with the board as crucial contributors to the company’s ongoing success: the need to diversify the client base, succession planning and development of a marketing plan.   When ConTech experienced the impact of the recession and downturn in the construction market, they were prepared to make changes which enabled the firm to rebound.

“What we did was take the seeds that were planted from the board and we started making continual changes in the company based on insights we gleaned from those folks,” commented Haughey.   Some of the changes that grew out of the work with their advisory board include a rebranding effort, new lines of business and a new business focus.

Today, ConTech specializes in concrete restoration with a greater focus on hospitality industry projects and has rebranded itself as ConTech Restoration.   Existing structure renovation projects include condos, timeshares and parking structures. The company has also expanded their scope of work and now offers commercial painting and waterproofing.  From 2009 to 2011 ConTech added 49 jobs and realized a 63% increase in revenue.

Haughey encourages other business owners to also take proactive steps for their business.  “I would absolutely recommend the SBDC at UCF’s Advisory Board Council to other businesses,” remarked Haughey.  “An advisory board helps a business owner fast track changes in his business because the board members have ‘been there and done that’ and their advice allows the business owner to learn from their years of experience.”

Founded with the purpose of strengthening Central Florida’s economy, the Small Business Development Center at the University of Central Florida conceived and developed the Advisory Board Council in 2003 to help small businesses reach the next level.    Funded by Orange County Government since the program’s inception to facilitate sustainable revenue and job growth, the Advisory Board Council provides established businesses with no-cost advisory boards comprised of area professionals who volunteer their expertise.

The ABC has found an extremely cost effective model to tap into community resources for the benefit of small businesses.  The program’s $100,000 annual budget is modest compared to the economic impact achieved by its participating companies.  The program has formed over 150 advisory boards for Orange County businesses, which have achieved $72.4 million sales increase, 1,968 jobs created and retained, $15 million in capital formation and $62.3 million in government contracts obtained.

all events
The Kimball Companies