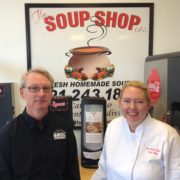 Orlando, FL – It all began in the back of a friend’s café. Julie Shipley started cooking soup for her friend on a 3×4 table with 2 burners and a couple of pots but she always used the freshest ingredients and had a knack for adding just the right seasonings. And her soups were a hit! Pretty soon she was selling to other restaurants and needed to move to a larger facility. Within a year she was delivering her soups to 20 local restaurants each week.

As can often happen with smart and able entrepreneurs, success breeds more success. Every week after cooking for the restaurants, Shipley had soup left over. She decided to “just see” what would happen if she opened her doors to the public and sold her soups in quart containers “to go.” Six months later she had expanded to her own store and had hired 9 employees. Her business, The Soup Shop, was up and running selling over 70 types of homemade soup with only the finest ingredients.

Eventually Shipley stopped delivering to restaurants and focused on her retail operation. The first two years in the store were not particularly profitable but sales were good. In 2015 sales started to increase but profits were still illusive. It was then that Shipley concluded that, as she puts it, “I didn’t know what I didn’t know” and decided she would seek assistance and learn how to make The Soup Shop not just popular but profitable too.

Julie Shipley turned to the Florida SBDC at Eastern Florida State College (FSBDC at EFSC) and FSBDC consultant Marty Duffy for help. She attended FSBDC business seminars and workshops, and took advantage of the FSBDC’s confidential, no cost expert consulting by meeting with Duffy on a regular basis.

Together, Shipley and Duffy worked to build a financial management system that would help her understand her business better. They put together a process in which the accounting system was tied to the point-of-sale system and the bank statements were integrated in a congruent manner to produce financial data in a timely fashion. Then Shipley learned from Duffy how to read the numbers and understand what they were telling her. Now she was able to make business decisions based on hard data and to forecast the impact of those decisions on the bottom line.

“Thanks to what I learned from Marty and the FSBDC, I began to change my decision making process,” Shipley says. “I could make sense of my financial statements which prompted me to make a lot of changes in the way we operated that made us much more efficient than we were a year ago, and much more profitable, too.” And the numbers bear Shipley out. Revenues are up 24% year-to-date; The Soup Shop is growing faster than the market; and overall profits have grown 238% year-to-date.

“I can’t say enough good things about my work with Marty, his office, the classes we’ve taken, all of the services I have received from the FSBDC,” concluded Shipley. “My company is a different and better company since I started working with Marty and the FSBDC. They are an amazing resource and I wish I had known about them sooner!”

With its main office in the National Entrepreneur Center located at the Fashion Square Mall in Orlando, the Florida SBDC at the University of Central Florida (FSBDC at UCF) is part of the UCF Office of Research & Commercialization and the Florida SBDC Network (FSBDC Network). THE FSBDC at UCF provides business seminars and no-cost, one-on-one business consultation to emerging and established businesses. The FSBDC at UCF serves an eight-county area that includes Brevard, Flagler, Lake, Orange, Osceola, Seminole, Sumter, and Volusia counties and maintains 10 service centers across Central Florida.

In 2015, the FSBDC at UCF served almost 7,000 entrepreneurs in Central Florida through consulting and training, resulting in more than 7,300 jobs created, retained or saved; $990 million in sales growth; $74.4 million in capital formation; $101.7 million in government contract awards; and 111 new businesses started.

Presented by Google Partner & National Trainer, Matt Weber, President of ROAR! Internet Marketing Get Started with the Most Effective Advertising Tool for Local Businesses: Google Ads Learn how to use Google Ads to drive more revenue for your business. Whether you are considering Google Ads for your marketing or are currently managing an account, this is a can’t miss session. Google Ads is a powerful, measurable advertising tool that should be in nearly every local business’ marketing plan. See how to use it with less risk and more success. Learn how Google ranks ads Learn whether you are a… [...]

Presented by FSBDC at UCF Assistant Director & Consultant, Pauline Davis and Consultant, Jose Molfino Cash is King. Every business has a hidden store of cash and hidden cash leaks. Utilizing the cash flow management strategies of large corporations, learn how to find, preserve, and use cash to manage and grow your business and increase profits. By applying these tactics you can vastly reduce the need for outside financing. You may never need to borrow money again!! Learn More [...]

Finding International Customers in a Virtual World: Export Marketing in the New Normal
4 May 2021

Managing for Profitability and Success: Creating and Applying Key Performance Indicators (KPIs)
11 May 2021

The secret to growing your business profitably depends heavily on establishing a real-time dashboard of key indicators of your business’s business performance. They enable you to make operational adjustments and seize on growth opportunities. In this webinar, we explore how to both identify those key metrics and use them to manage your business toward maximum performance across multiple functions, including sales, marketing, operations and profitability.  Topics to be covered:• What are Key Performance Indicators (KPIs)?• Determining the most important metrics to measure• Establishing an effective performance dashboard• Connecting team members’ contributions to the business’s health [...]

Business Plan Writing Made Easier
13 May 2021

Presented by FSBDC at UCF - Lake County Area Manager & Consultant, Eddie Hill Your business needs a roadmap for every stage of its growth. We’ll remove the mystery of how to create a business plan, the information that should be included, and how to use it as a tool to keep your company on track for long term growth. Fee: No cost Register Now [...]

Presented by FSBDC at UCF Consultant, John Finnegan The need for business owners and executives to take a creative and innovative approach to protecting and growing their business was critical in the COVID environment. Frankly, it’s every bit as important as businesses enter the “New Normal”. We will introduce and discuss a number of “Outside the Mask” ideas designed to help broaden your approach to growing your business. Learn More [...]

Does Your Website Comply with The ADA? What Every Business MUST Know
25 May 2021

The Americans With Disabilities Act (“ADA”) has been around for more than 30 years.  However, in the last few years, increasing attention - and ensuing lawsuits - have focused on the accessibility of websites for the disabled.  Along with the tremendously increased use of the internet and ubiquitous websites for commerce, this trend is only increasing.  Indeed, Florida is one of the states that has seen the most lawsuits in this area.  What businesses do not know in this area can truly hurt them.  There is significant risk, and increased likelihood of being a defendant in a lawsuit, for businesses… [...]

Hiring the right employee is a challenging process.  The right employee can make all the difference in a company’s success and can often make up for the absence of other resources such as facilities, working capital, and limited products. The wrong employee can cost you valuable time and money. It adds up to making the hiring process crucial for small businesses.  In this webinar you will learn:• Best hiring practices and how to overcome challenges common to small businesses.• How to properly onboard a new employee. [...]

Presented by FSBDC at UCF - Osceola County Consultant, Rafael Pratts A webinar providing an overview of the marketing process for small business, as well as a close look at all elements of a marketing plan. Marketing is the driver of revenue growth and an imperative for small business success. Topics include the traditional four “P’s” of marketing – Product, Place, Promotion, and Price – as well as three new “P’s” with special application to small businesses – Positioning, People, and Planning. Fee: No cost Learn More [...]