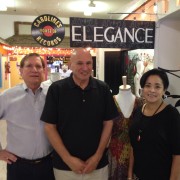 Entrepreneurs often don’t end up where they expected to.  Often the original plan evolves and the business they thought they were inventing transforms into something different. That was the case for Evie and Jack Valerio; what started as a hobby has evolved into a full-scale business, and they couldn’t be happier and more excited about their future.

Evie is an artist. She creates amazing polymer clay jewelry. She started crafting necklaces and other pieces in her home. And then she claimed the spare bedroom and an artist’s studio was born. While friends and relatives craved her work and eagerly purchased her creations, over time they grew in number and she began to consider how to make her jewelry available to a larger audience.

The original idea was to launch an online business. That evolved into a desire to “take the show on the road” and sell at craft fairs once a month. Then the idea of a retail store popped up. The evolution of the business from part-time, online venture to a full-blown retail store was moving very fast, in fact a little too fast for her husband Jack’s comfort.

Jack will be the first one to tell you he is a very cautious person. He makes sure to do as much research as he can before he moves ahead with something, especially something as massive as opening a retail store. In this case, he started out by asking around to see where he could get help. As a career school administrator, he felt out of his element in the world of business and wanted to find professionals who had been successful owning and running a retail store.

Initially, Jack turned to the Kissimmee/Osceola County Chamber of Commerce, his local chamber, where he found valuable resources. Perhaps most valuable, however, was their referral of Evie and Jack to the Florida SBDC at UCF office in Kissimmee.

At the FSBDC, they found business training and no-cost, confidential, expert, one-on-one consulting assistance. They learned the mechanics of starting a business, how to write a business plan, the basics of bookkeeping and more. Chuck Wheeler, an FSBDC consultant based in the Kissimmee office, worked with them, answered Jack’s questions and helped guide them through the steps to opening their business.

And open a business they did, just nine months after starting with the FSBDC. ELEGANCE by EV, a charming boutique featuring women’s fashions and accessories and, of course, Evie’s wonderful jewelry, launched at the beginning of 2016 in Historic Cocoa Village, one of Cocoa Beach’s most popular destinations. They are off to a good start and Evie is already planning the expansion of their business.

“My advice to other entrepreneurs is to use the FSBDC and all the consulting and training they offer,” says Evie. ”It’s invaluable. And do it first, before you jump into being in business.” “Don’t wait until you have problems,” continued Jack. “Do a pre-emptive strike and learn from the FSBDC before the challenges of running a business come at you.”

CANCELED: Digital Marketing: Getting the Most Out of Your Email, Social Media and Content Marketing Strategies
20 August 2020

The Florida SBDC Network, in partnership with Madison Street Strategies, is hosting workshops across

Presented by Hal Thayer, FSBDC at UCF Consultant Make your future happen; don’t let it happen to you

CANCELED: What Is the Business Worth? Getting the Highest Return on Your Investment
5 November 2020

Presented by Pauline Davis, FSBDC at UCF Consultant Interested in buying a business? Or do you want